Dreadnoughtus Schrani, possibly the largest dinosaur that ever existed, was all over the news today. This new species of titanosaur from Argentina - where all the biggest dinos seem to have come from - is believed to have been over just over 85 feet (26m long) in length and would have weighed up to 60 tonnes. It's a big bugger.

But once again I find myself saddened that no one called it Brontosaurus. Brontosaurus means 'thunder lizard', which is surely appropriate for the largest ever dinosaur (that we know of to date). And the name is available! 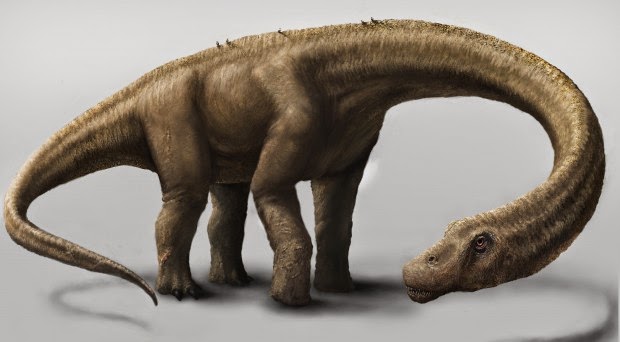 When I was a kid, there was a small, select group of celebrity dinosaurs that everyone knew. You know their names too: Tyrannosaurus Rex, Triceratops, Stegosaurus, Diplodocus ... and Brontosaurus was there in the dino Green Room with them. Incidentally, you may also have had Pterodactyl in your list. But that wasn't a dinosaur. And it didn't exist. There were pterosaurs - flying relatives of the dinosaurs - of which one small pigeon-sized species was called Pterodactylus. The one with the big boomerang-shaped crest on its head that many people think of when they think 'Pterodactyl' is probably Pteranodon. There is, sadly, also a growing body of evidence to suggest that what we've been calling Triceratops is actually just the juvenile form of the larger Torosaurus. You can read all about it here.

But back to Brontosaurus which, as I said, is available as a name ... because it doesn't exist either.

Brontosaurus was a casualty of the so-called ‘bone wars’ of the mid-19th century in which fossil hunters constantly tried to outdo each other. Two of the main players were Edward Drinker Cope and Othniel Charles Marsh (left and right below), whose rivalry was so intense that fossils were sometimes damaged or destroyed in their haste to get them out of the ground. It also meant that, in their rush to be first with any new discovery, they sometimes based their claims on inaccurate or sketchy data. 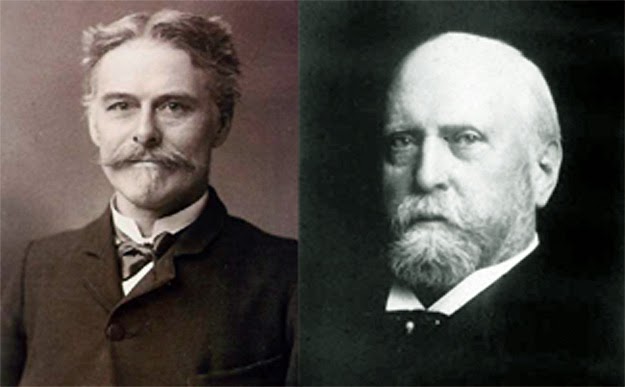 In 1877 Marsh published details of a partial fossil of a sauropod – a long-necked and long-tailed dinosaur – measuring some 50 feet in length. For reasons best known to himself, he called the animal Apatosaurus or ‘deceptive lizard'. Then, later in the same year, he published again, this time describing a much more complete fossil skeleton of an even bigger sauropod called Brontosaurus, which was some 70 to 80 eighty feet in length. Because the Brontosaurus skeleton was so complete, it was the first sauropod to be mounted in a museum – in this case the Peabody at Yale – which is why it very quickly caught the public’s imagination. No one had ever seen something so huge. However, in his haste to piss off Cope and the other bone men, Marsh had made a huge boo boo. In 1903, a man called Elmer riggs discovered that the Apatosaurus fossil that Marsh had found was a juvenile Brontosaurus. Therefore, applying the rules of ‘first specimen bags the name’, Brontosaurus became an adult Apatosaurus and its previous name was no longer valid.

But Brontosaurus refused to die. The name had become so synonymous with the long-necked sauropods that it continued to be used for toys, in films and TV shows and even in books for decades to come. I have dinosaur books from my school days – some 70 years after the name ‘Brontosaurus’ became void – and there is Bronto, floundering around in a swamp. And, at the same school, we sang a song about a Brontosaurus. Do you remember it? It took me a while to track it down but I found it: 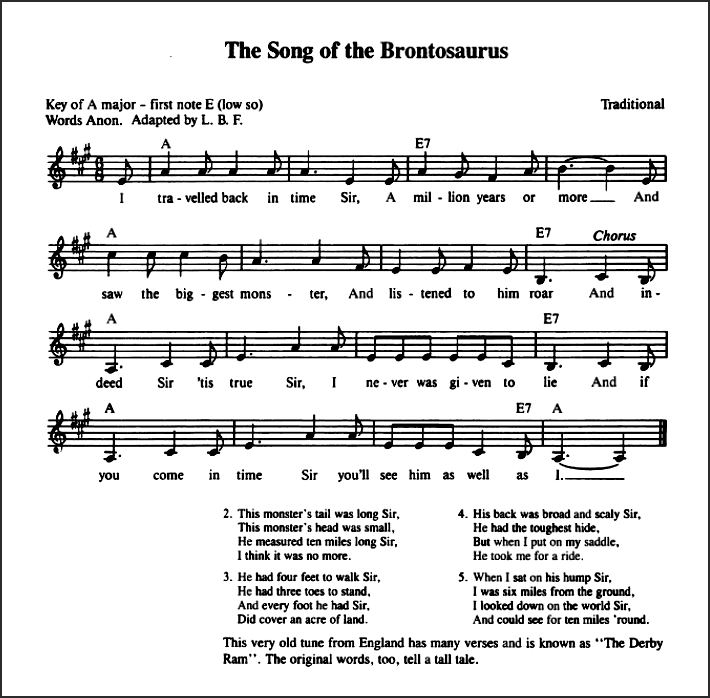 The whole 'Brontosaurus-isn’t-its-real name' issue came to a head, quite literally, in 1970 when John McIntosh from Wesleyan University and David Berman of the Carnegie Museum, discovered that the head that Marsh had mounted on his Brontosaurus was actually the head of a Camarasaurus. And then, to make matters worse, in 1989 the US Post Office released a set of four stamps featuring illustrations of dinosaurs ... and the scientific and education lobbies went nuts. Not only did one stamp feature a Pteranodon, which isn’t even a dinosaur, but one featured Brontosaurus, a dino that officially hadn’t existed since 1903. 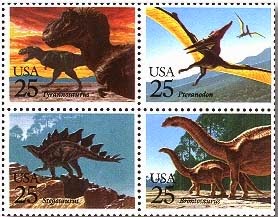 It was the final nail in the coffin of Bronto. Despite a last rallying call to save the name by some prominent people including biologist Stephen Jay Gould (who wrote a brilliant essay on the subject called Bully for Brontosaurus) and dino expert Robert Bakker, Brontosaurus was gently put to sleep and all dinosaur-related media now referred to the beast as Apatosaurus.

So that’s the situation today. And, despite a number of new gigantic sauropods being found in the past couple of decades, no one, it seems, wants to re-use the name and give us our Brontosaurus back (see afternote below).

And that makes me sad.

In recent years, as more and more huge dinosaurs have emerged from the Patagonian sands, the names have got more and more hyperbolic, such as Seismosaurus, Supersaurus, and Ultrasaurus to name but three. They don't have the class of Brontosaurus do they?

Dreadnoughtus is a rubbish name.

Afternote: As m'learned QI colleague James Harkin pointed out after I'd posted this, you can't re-use a species name that has been superseded as it is still technically a synonym. It's an annoying rule, but sadly true.

However, if it is a synonym, it must therefore have equal weight. Otherwise, what point is there is having a synonym?

So how about a campaign to replace Apatosaurus with Brontosaurus? I mean to say ... which is more accurate - is it a thunder lizard or a deceptive lizard? I know what I'd plump for ...

To read about my involvement with another sauropod - the London Natural History Museum's famous Dippy the Diplodocus - click here.
Posted by Stevyn Colgan at 10:20