Journey to the Centre of Wales Part 1

I've just returned from a five day mini-break in Wales, which was very welcome. My schedule means that I haven't managed an actual, proper holiday in a couple of years but the occasional mini-break keeps me sane (the last one was to Dublin - see here and here).

I booked a farmhouse called Moorshead in the Vale of Glamorgan, South Wales, near the village of Sigingstone. It was wonderfully secluded - the only sound you could hear was birdsong, lots of birdsong - and was within striking distance of the coast and towns like Cowbridge, Boverton and Llantwit Major and not that far from Cardiff. The owners, John - a photographer - and Sian - a broadcaster with BBC Wales - were very much my kind of people; artistic, smart, witty and with a love of good quality local produce. The full Welsh breakfast every day included local mushrooms and potatoes, handmade sausages and bacon from a nearby butcher, home baked bread and eggs laid by their own chickens that morning. It was fabulous. And, nearby, I found the most pointless yellow lines ever. 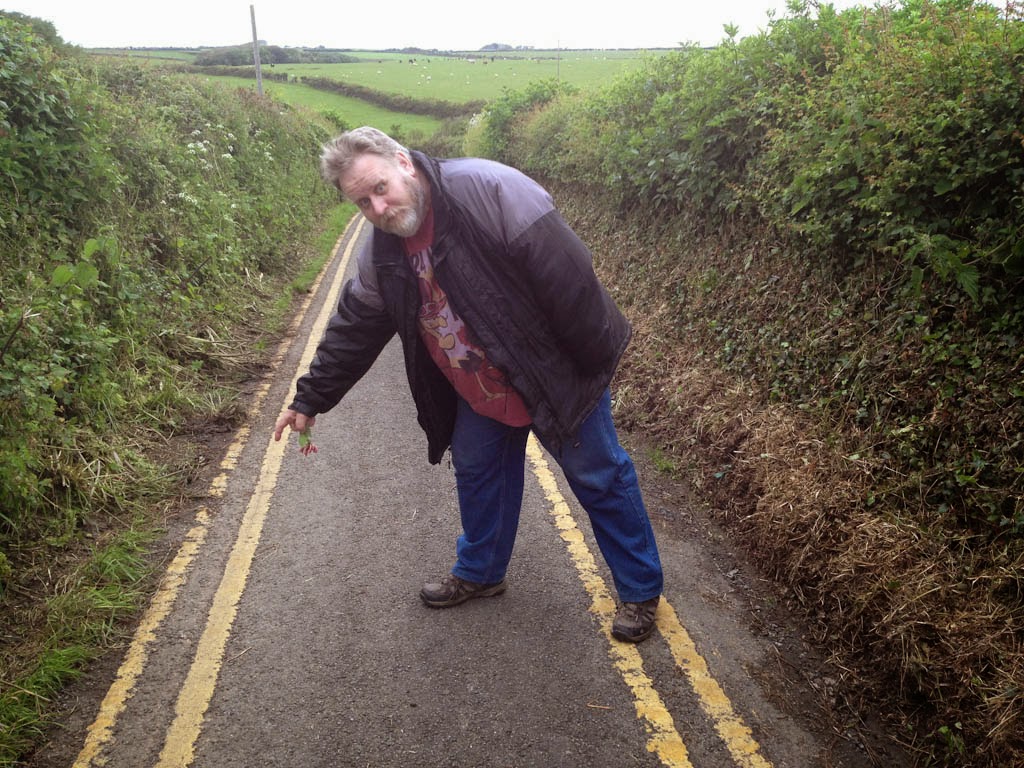 Sigingstone was a good kicking off point to visit the beaches at Ogmore by Sea, St Donat's Bay and Tresilian Bay. I had a good old walk around the limestone and slate beach at Monknash before a terrific evening meal at the Plough and Harrow. And I came away with an ammonite; the beaches here are very fossil rich and the curiously regular strata visible in the cliffs look like a crumbling man-made wall. 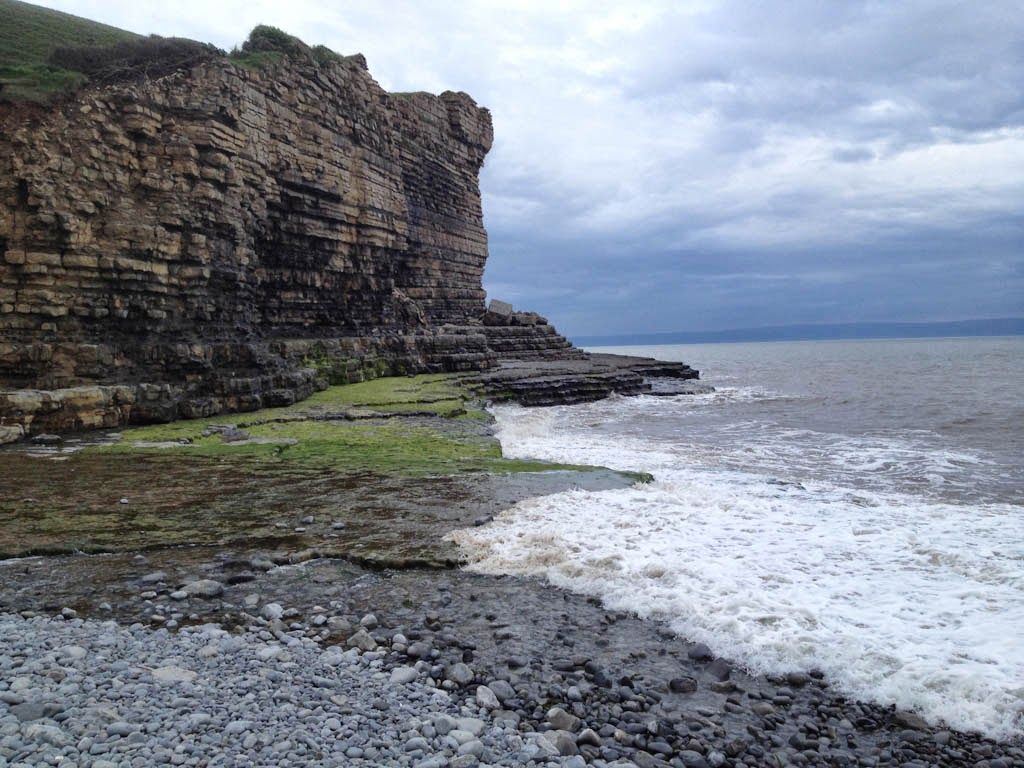 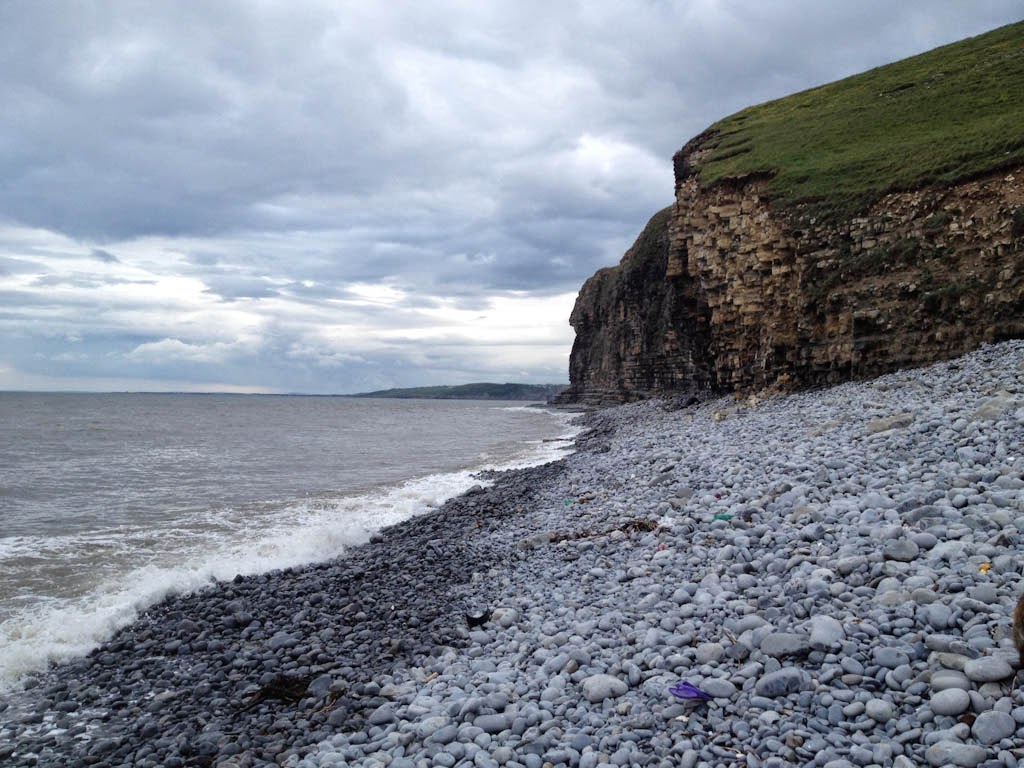 Wednesday started with a walk on the beach at Ogmore by Sea to brace myself for the day. Despite the rain, I really enjoyed being by the sea. I'm a Cornishman and grew up surrounded by the stuff and I do miss being near by. Plus I got to rescue a shark - a beached nursehound - and found a set of jaws of a quite different kind. 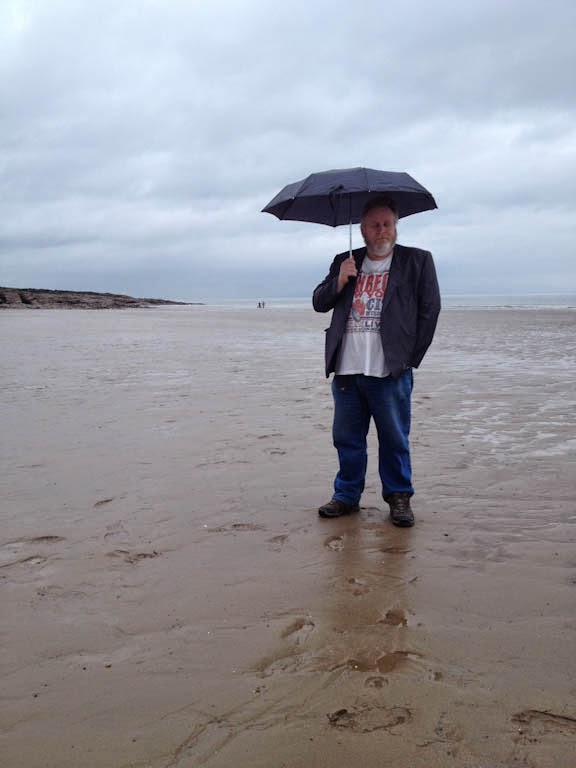 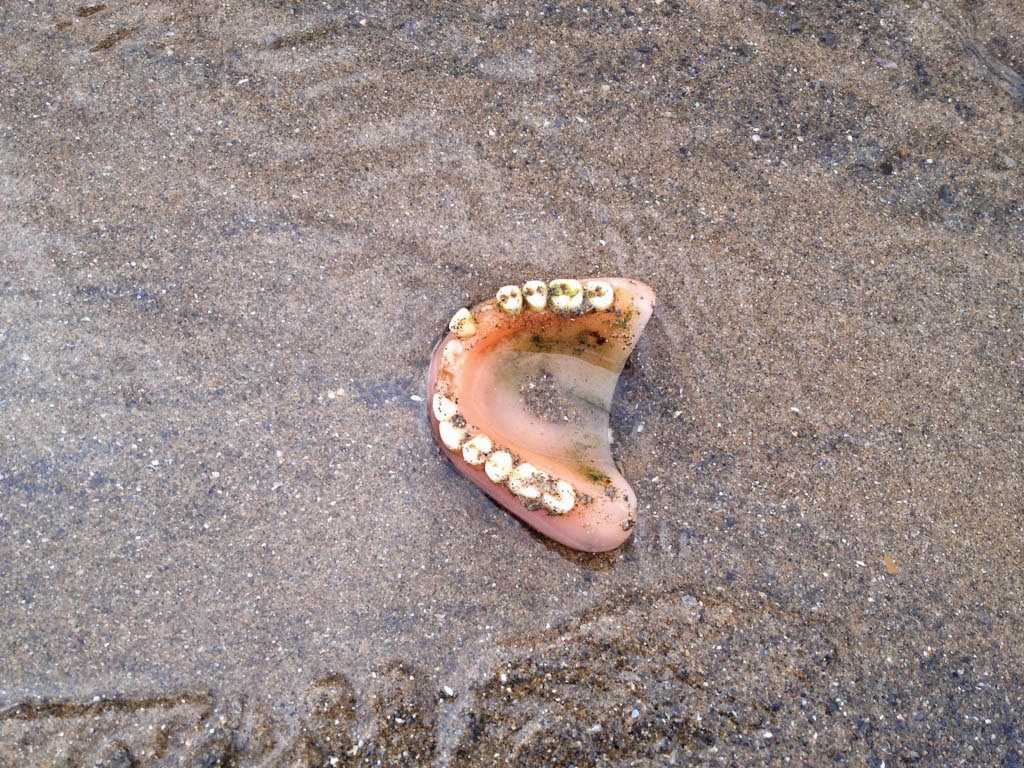 I'd been told that Cowbridge is one of Wales' more expensive towns and that there was 'lots of art' there. Sadly, 'lots' didn't particularly translate into 'good' or 'interesting'. What I saw was pretty bog-standard landscapes painted to a reasonable standard. However, I did find an amazingly old-fashioned hardware store that was positively TARDISian in its floorplan. Just when you thought you'd reached the end, there would be another brace of rooms. And all of it fronted by the kind of ancient till counter that Open All Hours' Arkwright would have loved. Amazing place and so much more character than any supermarket or chain store. 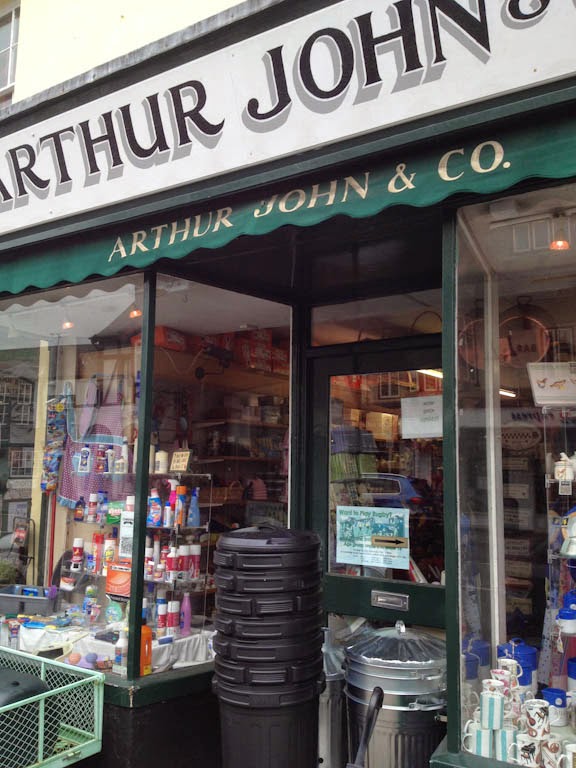 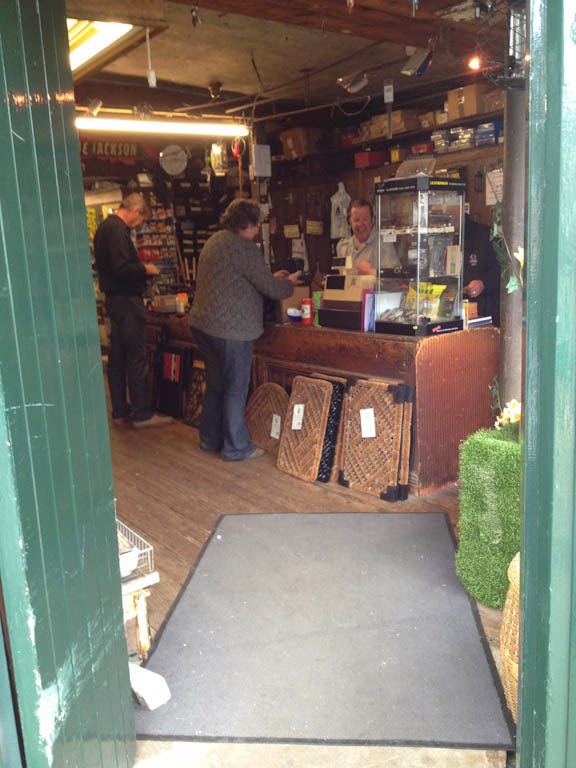 The baristas in the local coffee shop were a happy bunch ... 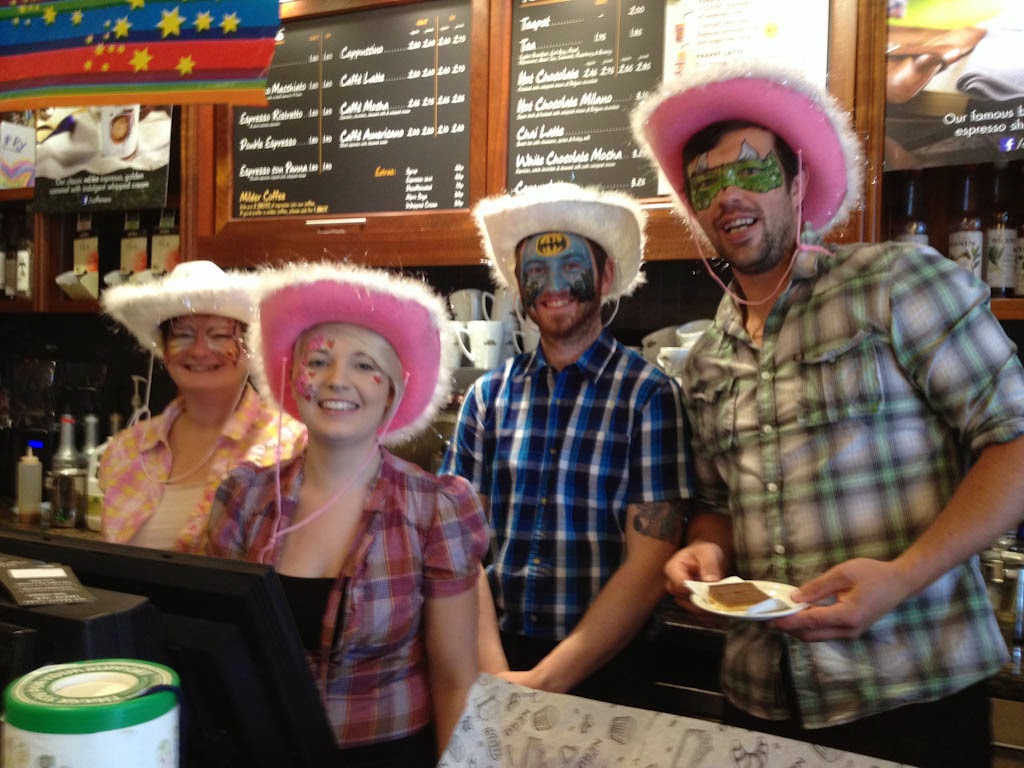 In the evening I ate at a pub curiously called The Pelican in her Piety which, as I understand it, is an allegorical story about Jesus. It did have a stunning view of the Norman ruins of Ogmore Castle of which this legend is told:

'Maurice de Londres, the son of the first lord, was staying at Ogmore Castle to partake in a deer hunt in the surrounding woods. The disinherited Welsh poached these animals whenever the opportunity arose - the punishment of which was torture and death. One day a Welshman of princely descent was caught in the act of unleashing an arrow at a stag. He was captured and taken to the castle. In the morning the tools of torture were heated and the prisoner prepared for the initial stage of being blinded. He was brought forth for the enjoyment of the dwellers of the castle in the courtyard.

The daughter of the Lord of Ogmore was impressed by this proud, unrepentant man and began to plead his case, reminding the Norman lords that it was they who had taken everything from the Welsh. It was her birthday and on this special occasion she craved a boon from her father that the life of this man be saved. De Londres in good humour granted her wish and taking advantage of his good mood she pressed further; she begged that the Welsh be given a preserve of land on which they could hunt freely. The Lord demurred at this but granted the wish on one condition; that the land should be no greater than the area around which the girl could walk barefoot 'from now to sunset' - she pleaded for sandals but was refused.

She started off at a brisk pace, first up the neighbouring hillside and then across the undulating hill top; but thorns and brambles slowed her down making her feet bleed. She struggled on traversing the hill top as far as she dared in the limited time and then made her way down to the sea. At last, just before sunset she reached a point by the castle where the old farm house stands today. The route she travelled was carefully marked by following soldiers and then became common ground. It is now known as Southerndown Common and has belonged to the people ever since.' 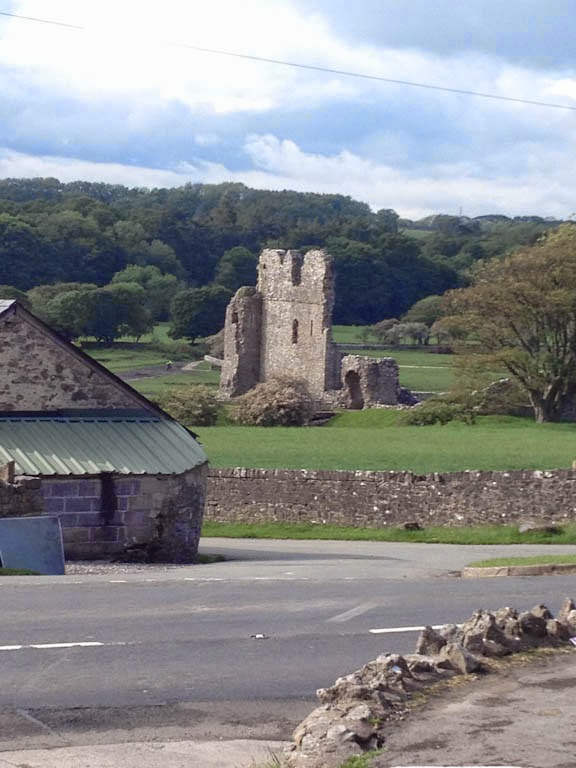 Thursday meant me enjoying a steam train ride through the Brecon Beacons on the Brecon Mountain Railway. The landscape between Pant an Pontsticill is absolutely stunning with forested hills surrounding the Taf Fechan reservoir. Along the route I chomped on a bag of traditional Lossin Dant Welsh mint humbugs bought at the sweetshop in Pant Station. Delicious. 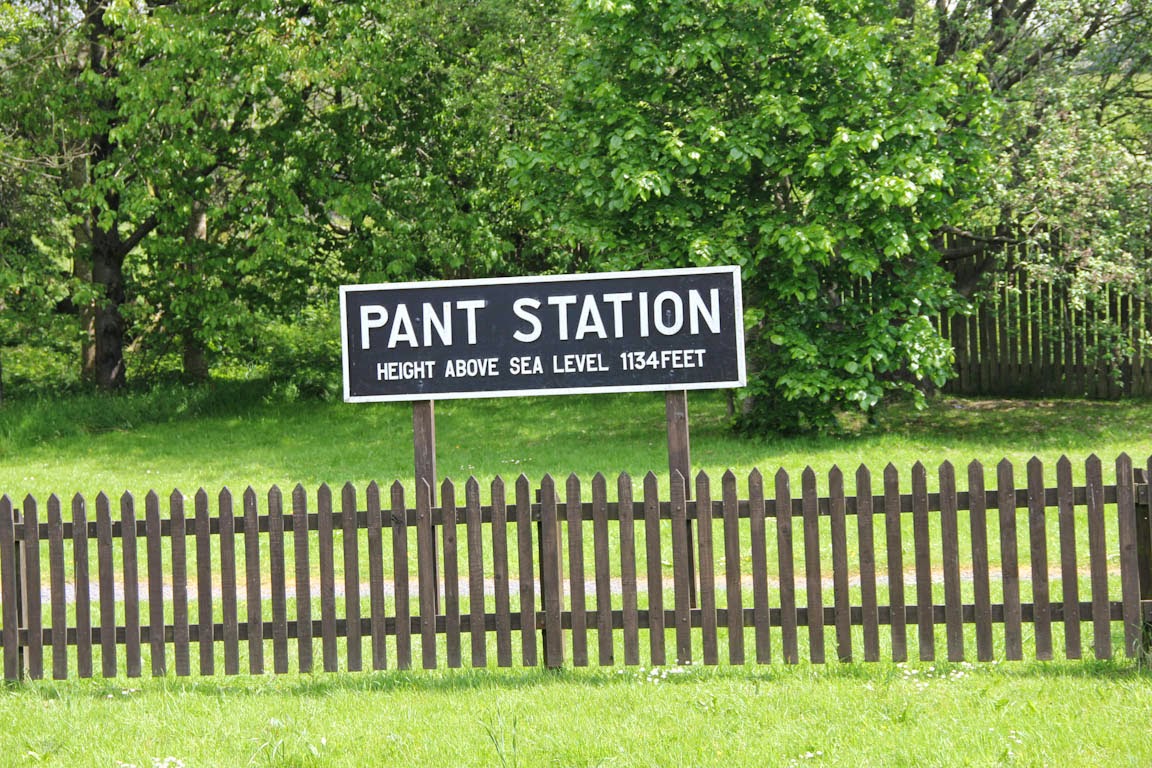 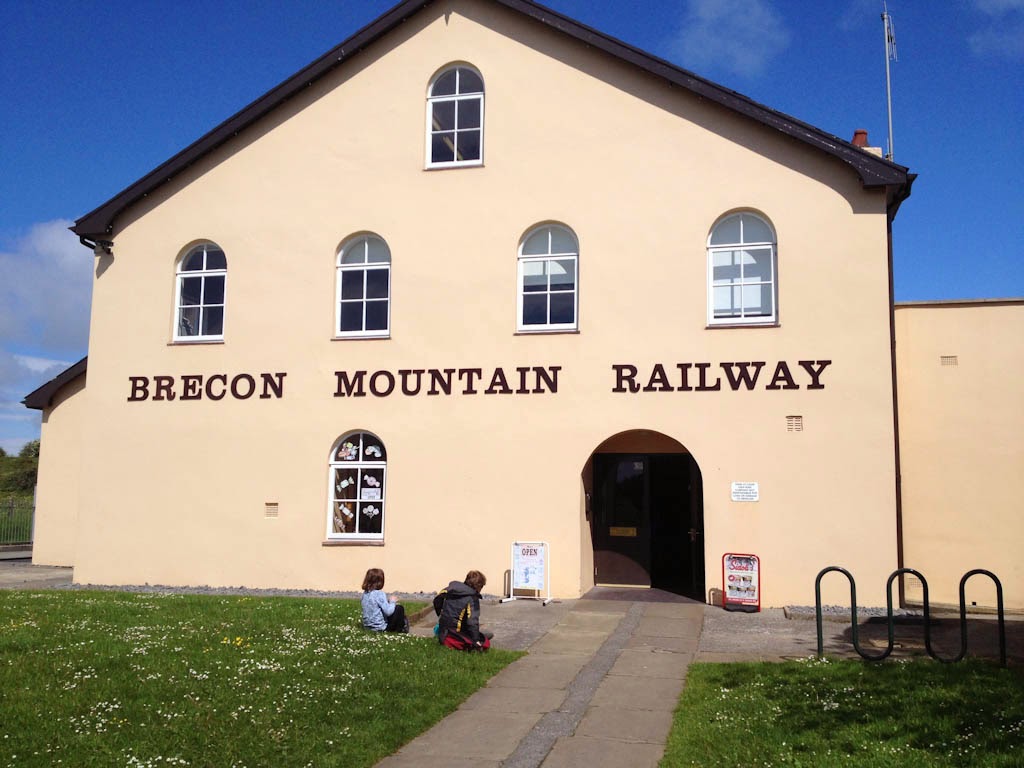 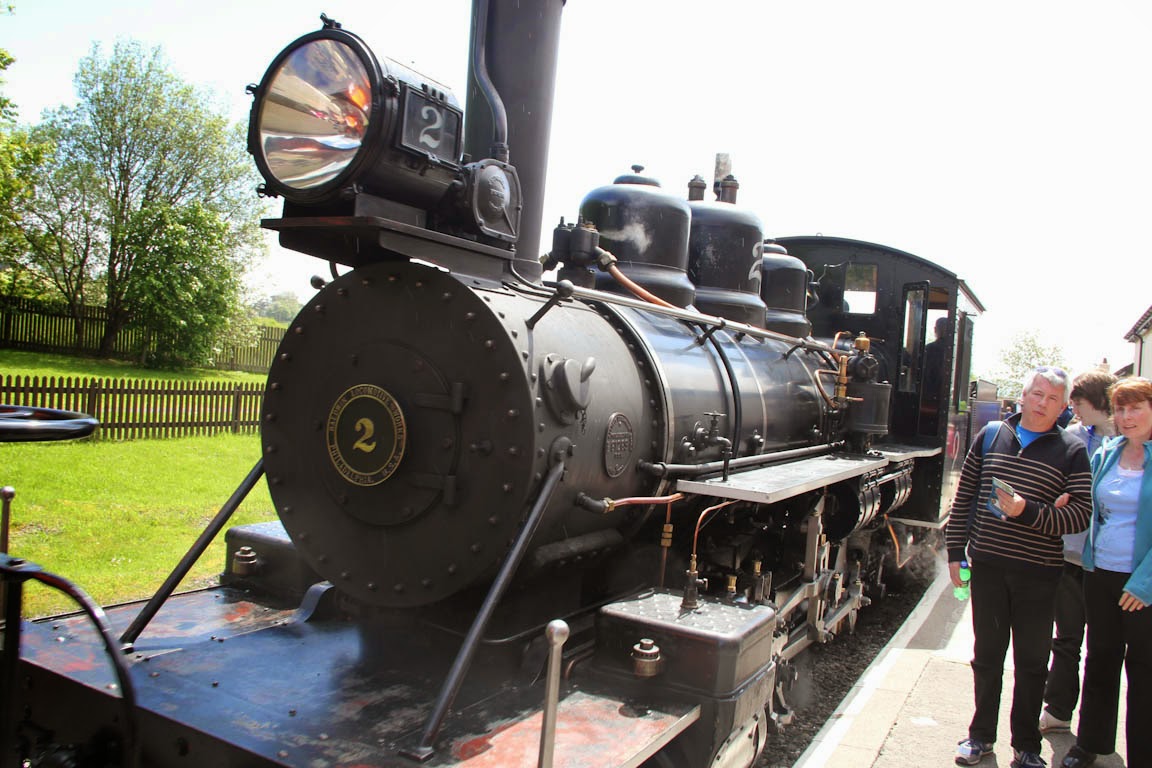 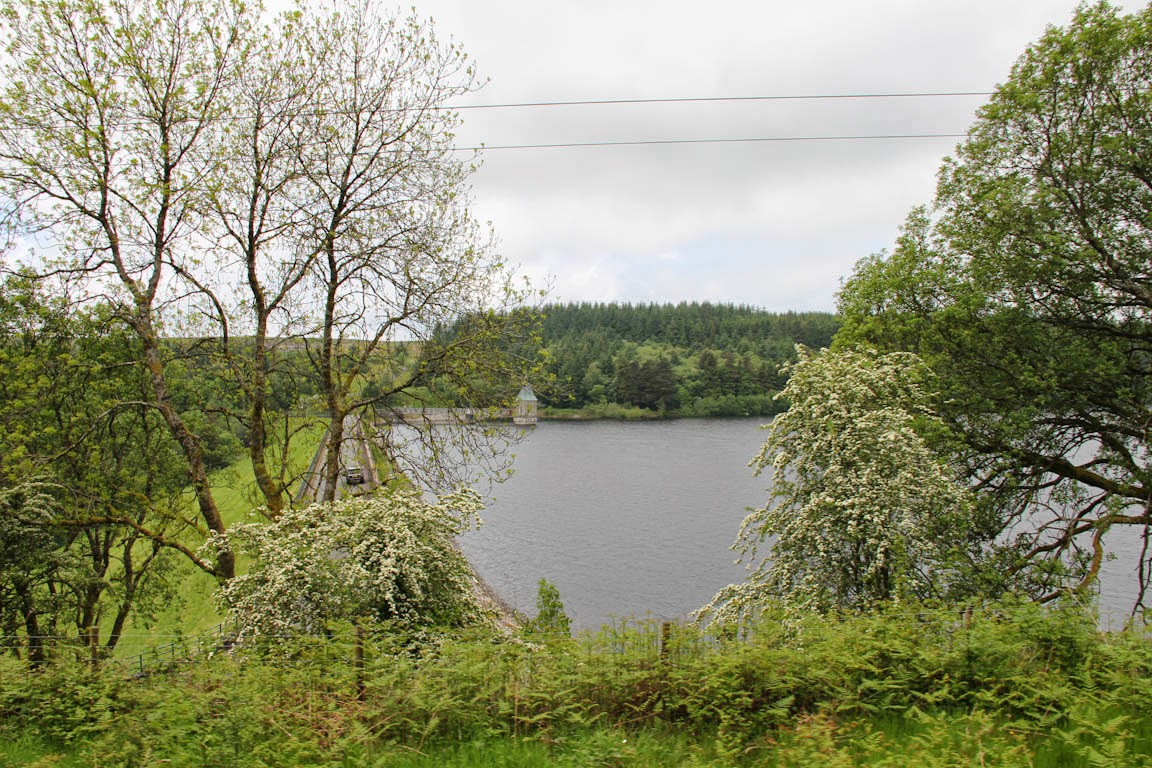 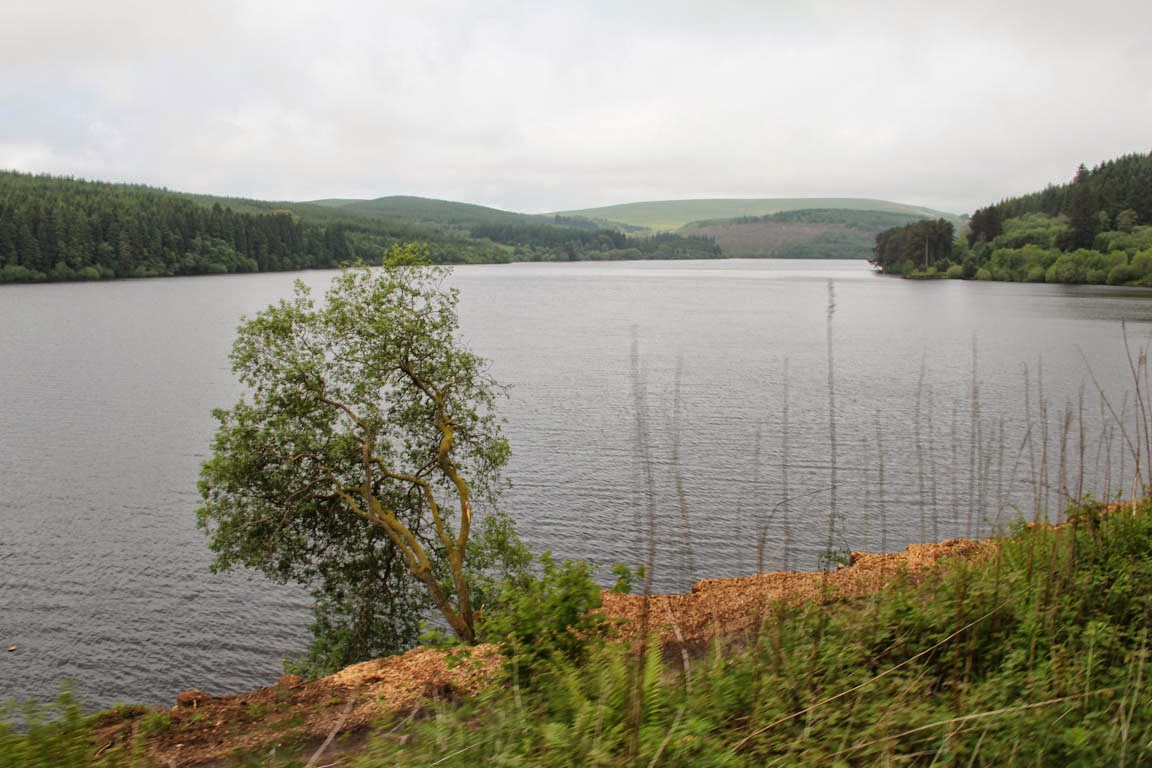 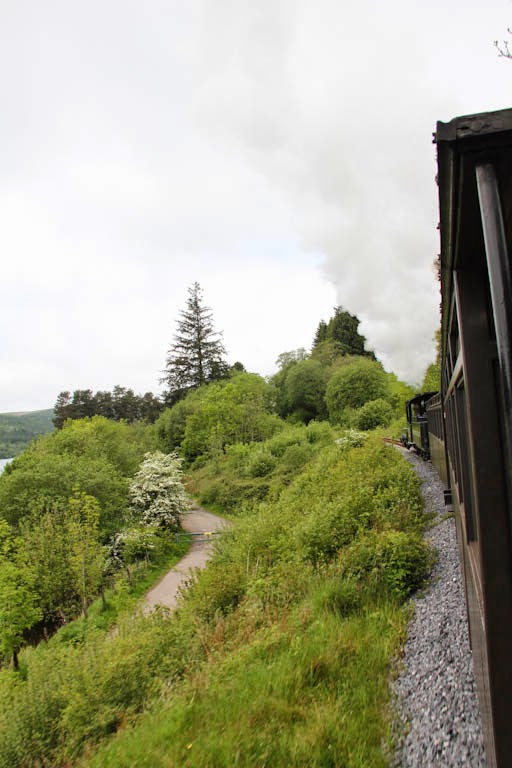 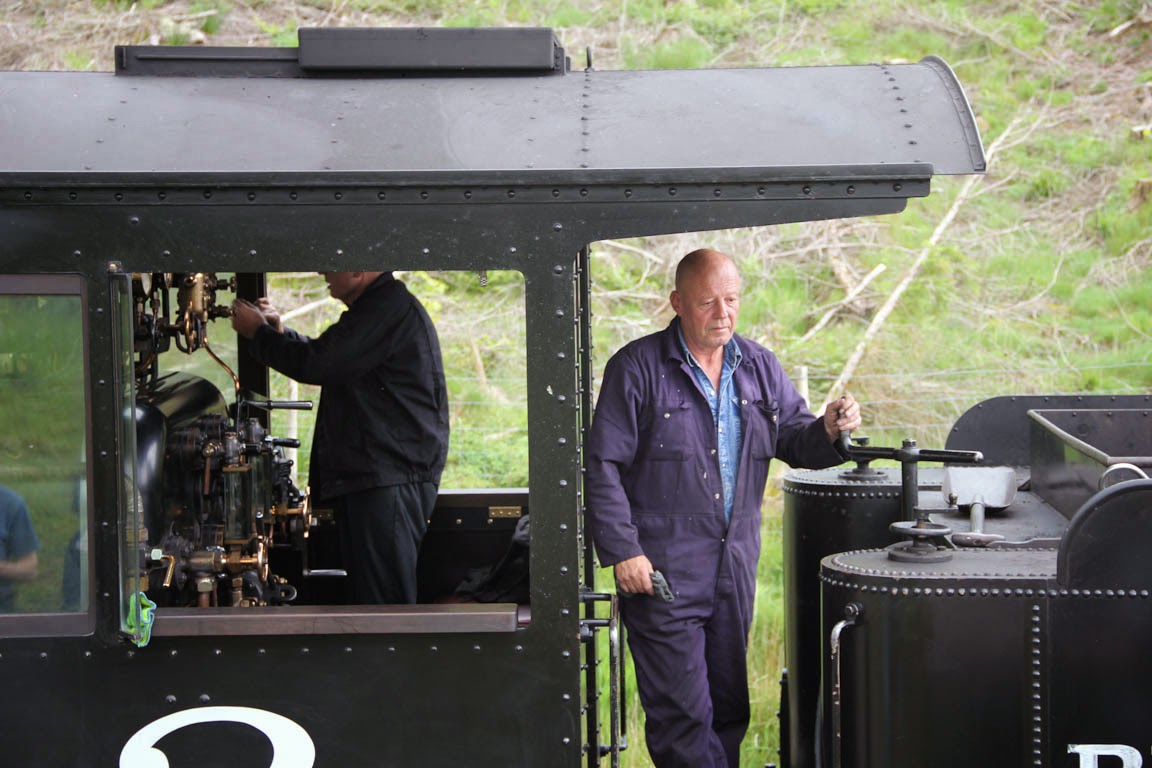 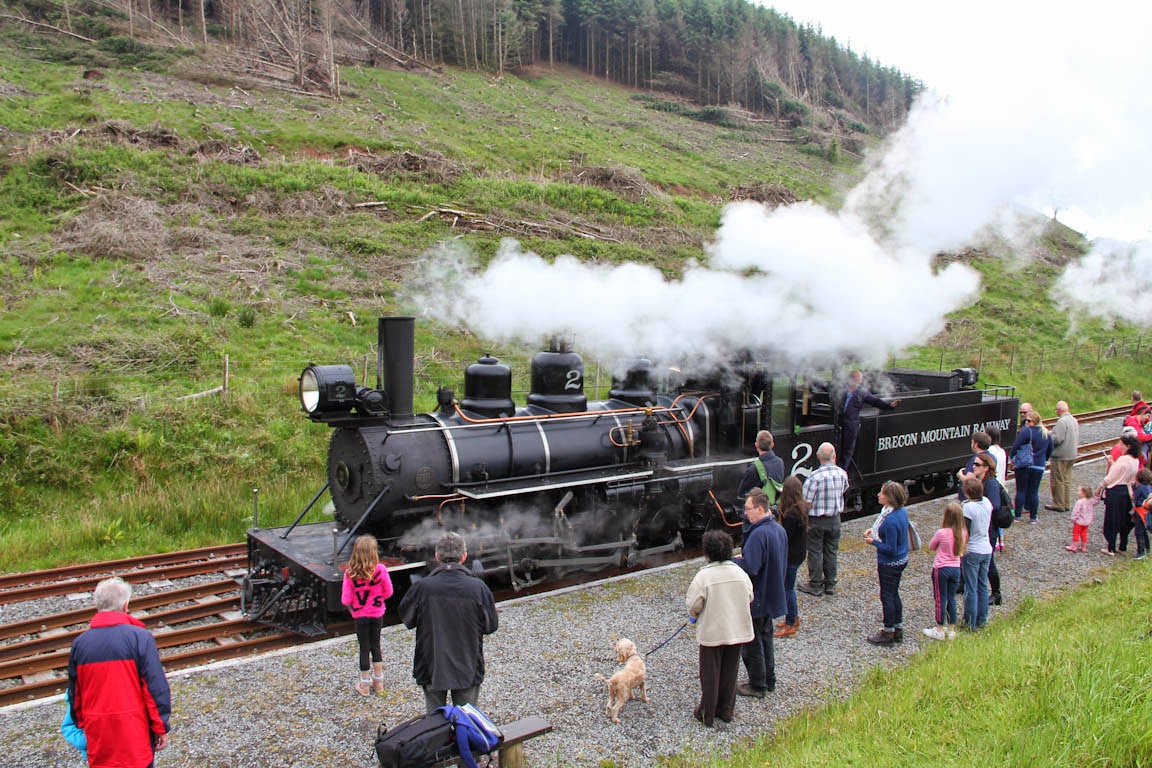 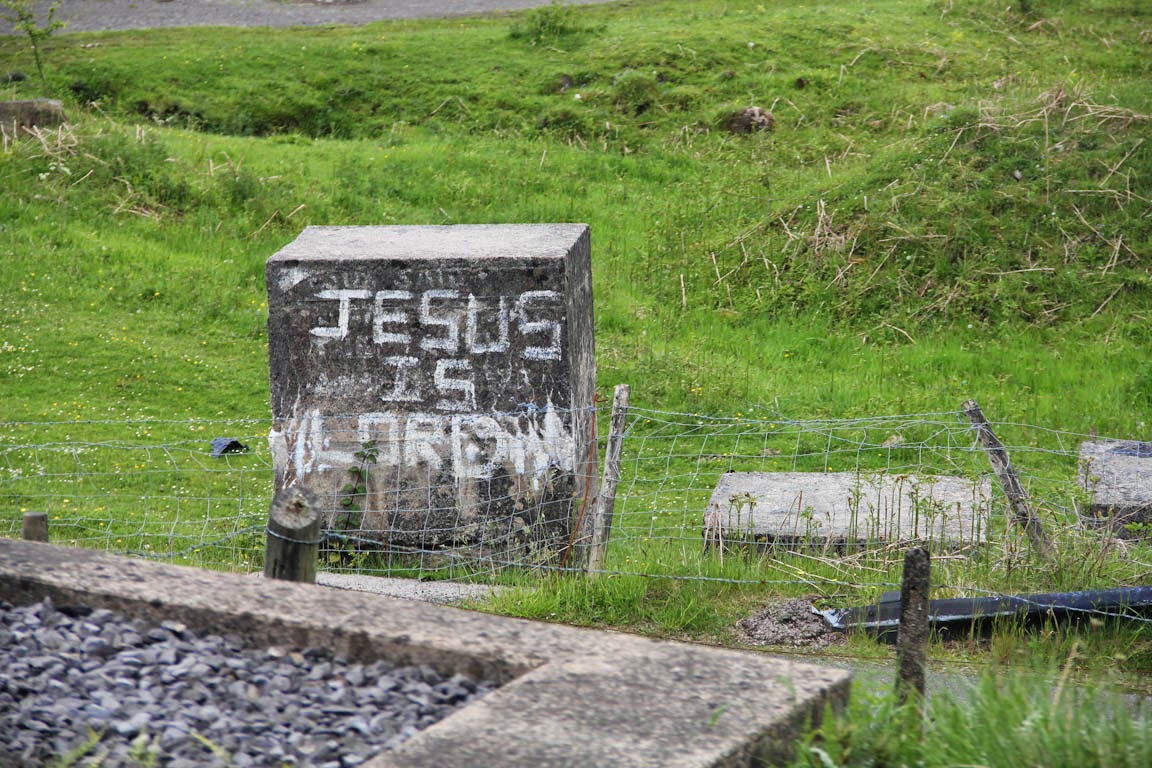