In the mid-1980s I worked in central London as a police officer and was often asked by tourists for good restaurants to eat in. I could usually answer their questions. All except one:

'Where can I get a good traditional British meal?'

It was a tough one to answer. There was a Beefeater Steakhouse and a Wimpey. There were pubs that served roast dinners or that specialised in pies (though nowhere near the quality found in some gastro pubs now). There were greasy spooneries where you could get a Full English. If you had a fat wallet you could try tea at The Ritz or visit Tiddy Dol's in Mayfair. But that was pretty much it. Plus, there was the unanswered question of what 'traditional British meal’ actually meant. Some people even scoffed at the idea that such a thing as British cuisine even existed. Wasn’t British cooking supposed to be dire? Didn’t Britons live on fried food and tasteless grey muck?


It annoyed me at the time that I had no direction in which to point them. A lot of British food is pretty amazing. The problem is that our cuisine is all so fragmentary. Go anywhere in France and you can get a great crepe Suzette. Can I guarantee a perfect cockle cake anywhere other than in Wales? Or a delicious Parkin anywhere other than Yorkshire?

I'm not sure if anyone actually knows how many different accents there are in the UK but I suspect it's in the thousands. In some rural areas, there are differences even between villages. On top of all of that, there are dialect words brought in from old Celtic, Norse and Anglo-Saxon and artificial accents like 'received pronunciation' that are more about class and aspiration than geography. Well, British cuisine is much the same; it ranges from whisky, haggis and neeps, cranachan and square sausage in Scotland right down to pasties and clotted cream, starry gazey pie, saffron buns and hog's pudding in Cornwall. Many counties have their own delicacies and so do many towns and cities. 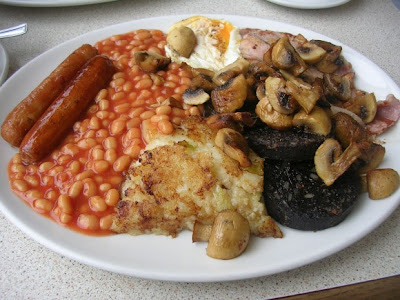 A truly British restaurant chain would offer the finest produce and the best dishes from all over the UK. And what a fabulous restaurant that would be! Just think about the astonishing range of cheeses we produce, the chutneys and pickles, the glorious casseroles, roasts and stews. Imagine the choice of sausages and beers, ciders and game meats. Then there's what we do best - puddings. Not desserts but puddings; spotted dick, rhubarb crumble with properly thick custard (Creme Anglais? Pah!), Cornish ice cream, treacle tarts and bread and butter puddings. It's great to see chefs like Hugh Fearnley-Whittingstall and Fergus Henderson trying to get us back to eating great British food ... but I still can't spot the British restaurants in London's West End. Damn me, if I had the money, I'd open a chain of them myself. And I reckon we’d be full every night.

Interestingly, when I asked my friends, family and colleagues for their favourite Brit dishes, they nearly all suggested what I would call 'comfort foods'. So maybe I should open a restaurant chain called Morrisseys where sad people can come to cry and assuage their melancholy with artery-clogging delicacies 'like Mum used to make'. The music played gently overhead would be by Radiohead or The Cure or, on really tragic days, Dido or the Lighthouse Family. I'm imagining the menu now ...

No one understands me - A slice of your favourite pizza, dipped in beer batter and deep-fried.

The Jeremy Kyle Special - Only available in the trailer annexe. Everything on the menu served with Diamond White or Buckfast Tonic Wine. Fights encouraged.

Any suggestions for other delights at Morrisseys?
Posted by Stevyn Colgan at 10:01